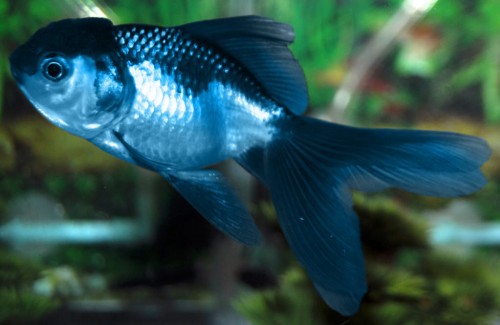 The Blue Oranda is prized for its sophisticated dusty blue coloration. Most prominent on its fins and the “hood” that covers its head, the color blue is accented by a warm, brushed nickel body color. The Blue Oranda is a metallic-scaled fish, closely resembling Veil Tail goldfish varieties in the shape and length of the tail. The Blue Oranda is one of many varieties of what is collectively known as ornamental or fancy goldfish; Carassius auratus auratus. Originally from parts of Asia, Japan, and China, Fancy Goldfish enjoy worldwide distribution due to controlled breeding programs.

As a member of the carp family, the Blue Oranda is generally quite hardy. They will do well in 30 gallon aquariums or larger, as well as backyard garden ponds of 180 gallons or more. In addition to a fine gravel bottom or well-rounded river rocks, the Blue Oranda will appreciate hardy, cold water plants. Keep in mind that goldfish are diggers and will scatter the fine sand onto leaves, injuring thin and less hardy plants.

There appears to be a definite courtship ritual when goldfish breed. Breeding often results in up to 1,000 eggs, with fry hatching in five to six days. They should be fed small pieces of live or prepared foods designed for egg-laying fish.

Goldfish are omnivorous, and will eat all types of dried and live foods. However, limit protein to 30% of the diet. A goldfish flake or pellet food will provide these fish with the proper nutrition.