Long, flowing fins, amazing color patterns and prominent features differentiate Fancy Goldfish from the Common Goldfish or Comet Goldfish. They do not grow as large as Koi, making them a very popular fish for aquariums, smaller ponds and water gardens.

The term “Fancy Goldfish” refers to members of the Goldfish family specifically bred to enhance certain colors or body characteristics, such as the tail or head shape. Goldfish are members of the carp family (Cyprinidae) which includes more native members of freshwater fish in the northern hemisphere than any other group.

Varieties of Fancy Goldfish include the Fantail or Ryukin, Veiltail, Globe-eye, Celestial, Bubble-eye or Toadhead, Pearlscale, Pompom, Lionhead or Ranchu, Black Moor, and Oranda. Each variety may share commonalities with other varieties but generally has at least one characteristic that sets it apart.

No matter what variety, Fancy Goldfish are sure to add color and beauty to any aquarium.

Bubble-eye Goldfish are some of the most recognizable, bizarre and endearing. They develop a large fluid-filled “balloon” under each eye that wobbles as the fish swims. These fragile sacs can be ruptured on sharp surfaces, by aggressive tankmates, or on filter in-takes. Consider their environment and tankmates carefully as injuries to the sacs can become infected if they are damaged.

Fantail Goldfish are an egg-shaped variety show goldfish, its distinguishing feature being a split or double caudal (tail) fin. The body is short and stubby and the head is very wide. These fish are bred for showing and its main feature is its split caudal fin (tail fin) that is moderate in length and slightly forked. A Japanese version of the Fantail, the Ryukin Goldfish has a highly curved back and a wider caudal fin than the Fantail

Lionhead Goldfish are similar to Oranda Goldfish, but Lionheads do not have dorsal fins. The Lionhead’s back slopes towards the rear of the fish where it meets the fan-tail. Like the Oranda, the Lionhead has a wen – a bumpy raspberry-like growth on the head – but the Lionhead’s wen covers the head, cheeks and gill-plates. It may cover the eyes and impair the vision with time.

Orandas were developed as a fancy variety in 1590! These fish are immensely popular in the east and in the west. As they mature, these fish develop a fleshy hood-like head growth. They have rounded bodies, split, double tails, and they are available in several color varieties including red, red and white, blue, “Panda”, calico, yellow, brown, white, and the ever popular red cap.

Ryukins are admired for their uniquely-shaped, rounded bodies and very high, arched backs. The face of the fish is more pointed than other types. They are also more assertive than many other fancy types, so Ryukins should not be kept with docile or less agile varieties. Their deep body shape can cause digestive complications, causing the fish to float on its side; added vegetable matter in their diet and a day a week without food can usually help to remedy the ailment.

Shubunkin Goldfish are beautiful fish that are almost always speckled or have a variegated color pattern. The unique characteristic of the Shubunkin Goldfish is not their wild calico patterning, but that its pattern is set on a blue background. This is a color which is quite rare in goldfish. A Shubunkin Goldfish can have so many colors to its pattern it is often referred to as the Calico Goldfish. These colors include yellows, oranges, reds, browns, blacks, purples, grays, and whites; and they are set on a blue background. Other descriptive names for this fish are Speckled Goldfish, Coronation Fish, and Harlequin Goldfish. The color blue is quite rare, which makes the Shubunkin a more valuable goldfish.

Telescope Goldfish are bizarre looking fish, with eyes perched on stalks sticking out from its head. The eyes are a most curious characteristic of the Telescope Goldfish.Their large eyes are set on top of long telescope or cone-like stalks mounted on the sides of its head. On some fish these stalks can extend out as far as 3/4 of an inch (19 – 20 cm), but they don’t really start to protrude until these fish are about 6 months old. The bi-colored black/white version is affectionately known as the Panda Telescope Goldfish and there is a unique chocolate version with orange pompoms. The well known, and very popular Black Moor Goldfish is basically a black version of the Telescope Goldfish though its eyes don’t protrude quite as far. 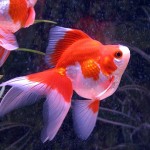 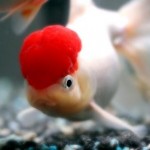 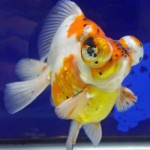 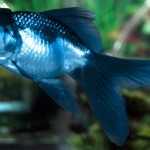 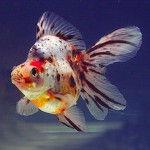 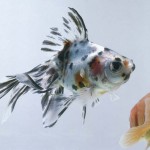 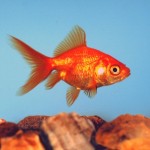 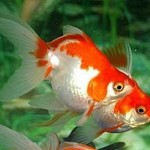 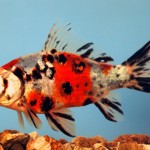 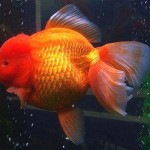 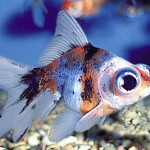 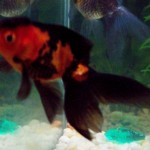 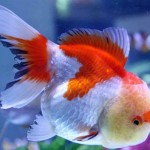 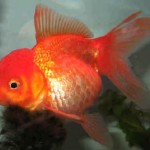 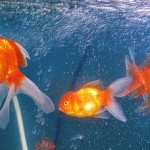 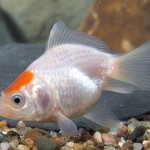 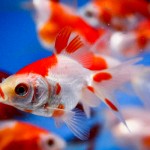 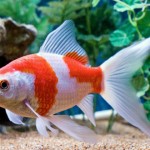 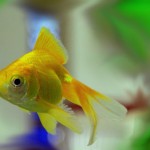 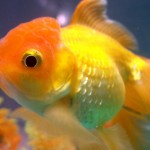 Shop at AquA AnimaniA Online! Get the same great service, featuring exclusive savings and online only Coupond$, including local/regional delivery, shipping services plus much more!